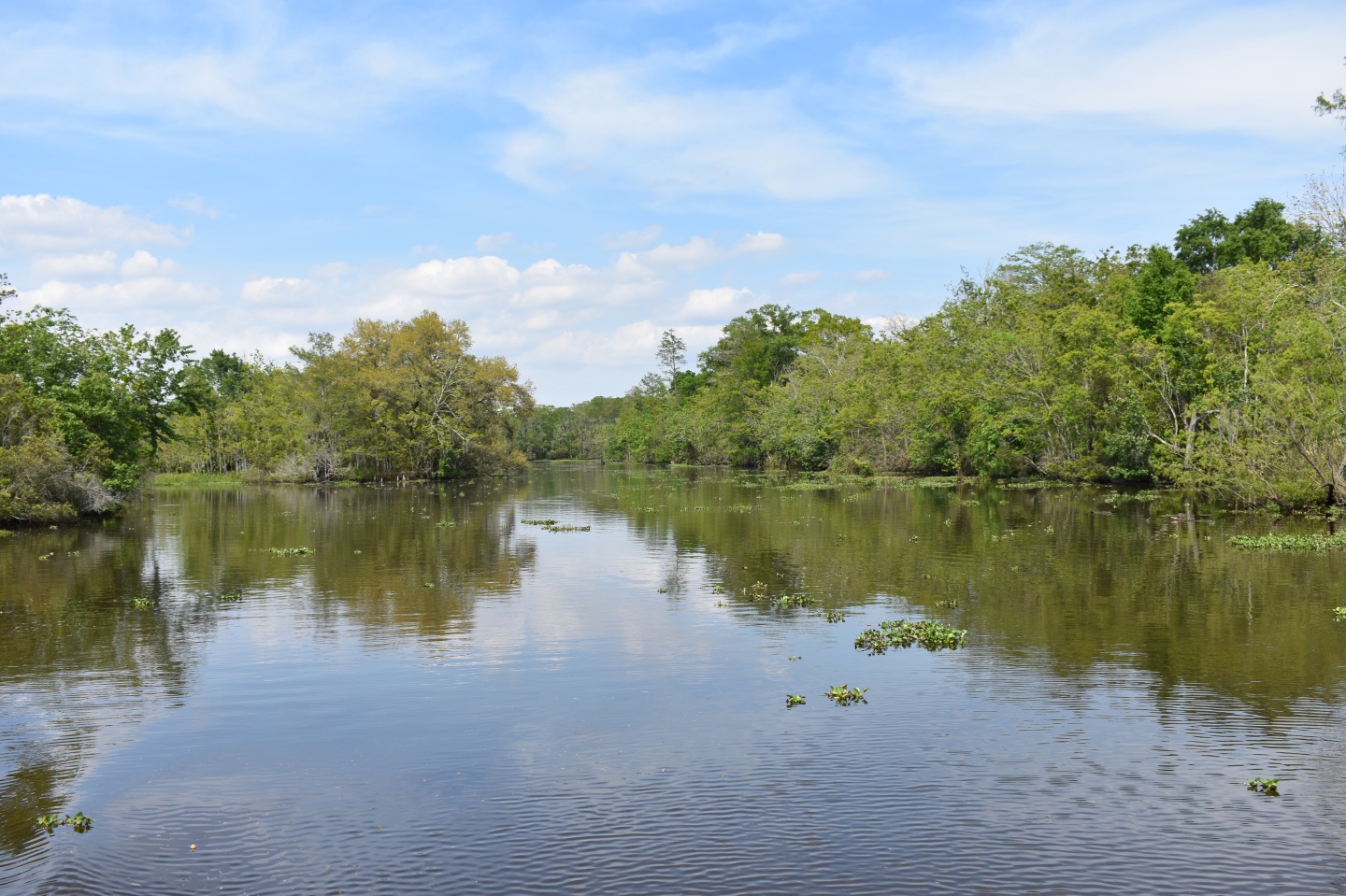 As my plane descended into New Orleans I was struck by the view of the surrounding swampy areas. Of course New Orleans is in a swampy area, is much below sea level in many places, and continues to sink into the ground. From the sky the city is even more of an absurdity, a point reinforced by the nearness of the ocean, which can just be glimpsed on the horizon. The city is propped up as much by its levees as by its leading industries: tourism and the petrochemical sector. The former, I experienced fully, the latter, I only viewed from afar, but in both cases I left feeling disappointed.

Gladly, I escaped the city for a swamp tour, a chance to experience a warm sunny day viewing animals from a boat. Commanding our swamp boat for the day was Captain Jason, whose family history in Louisiana went back at least for generations, and his experience guiding tours at least twenty years. The tour began in a narrow channel covered in overgrowth, still within site of the highway. “We’re in about four feet of water now, but we’ll get out there a little deeper here shortly,” the captain informed us, “and don’t worry, you’ll see lots of animals today.”

As we cruised through the swamp the captain informed us of the history of the area. “See this channel we’re in now, see how it’s perfectly straight, and there’s a big bank of dirt on either side? That’s because the oil companies came in here looking to drill. They dug out these channels, threw the dirt to the side, and used the water as a means to access the oil.” He pointed out a rusty old pipe sticking out of the water. “A few decades ago the government bought the area, and now its all preserved. No oil extraction, no hurting the animals.” Soon we were out onto the natural bayous, with graceful curves and shallow banks. On some spots, large patches of grass were matted down from where alligators would sun themselves.

The swamp was full of creatures, a pair of eagles had a nest were they were in the sixth consecutive year of raising young together, fished splashed in the water, and turtles slipped quietly off of logs as we approached. Most notable were the alligators of various sizes, distributed all through the swamp. “You used to be able to feed them marshmallows, so they would come right up to the boat. But that hasn’t been allowed for years now, and the alligators no we won’t feed them, so they don’t come up to the boat anymore.” Despite this statement, the captain called a big alligator, which began swimming lazily closer. “He remembers I used to feed him.”

On the way back to the dock Captain Jason ducked into the storage closet and pulled out an alligator for everyone to hold. “This one didn’t come from this swamp – that’s not allowed – but we make sure he’s taken care of. He’s about four and a half years old.” The alligator was maybe a foot and a half long. Holding him, he was a gentle, nearly docile creature, and he made no threats towards me. While I wasn’t thrilled about this gator exploitation, I was glad for the chance to feel the reptilian skin.

Later in the day we had the chance to visit the gulf coast, taking a long drive south on Route 1 out to Grand Isle. The beach community was remote and quite calm, far different from the Carolinian or Californian beaches to which I’m accustomed. The area was exceptionally peaceful, the drive past the marshes afforded big views of greens and blues and open sky. The beach was filled with soft sand and calm waves, and was pleasant underfoot until I stepped in some black gook – oil, perhaps from the BP spill. As I struggled to get the stain off my foot I thought about all the animals that had been wrecked by the spill. It was not comforting that oil rigs could be seen not far off the coast. Driving back, I couldn’t help but wonder why the new causeway to Grand Isle had to be built. Why couldn’t we just leave an area alone?